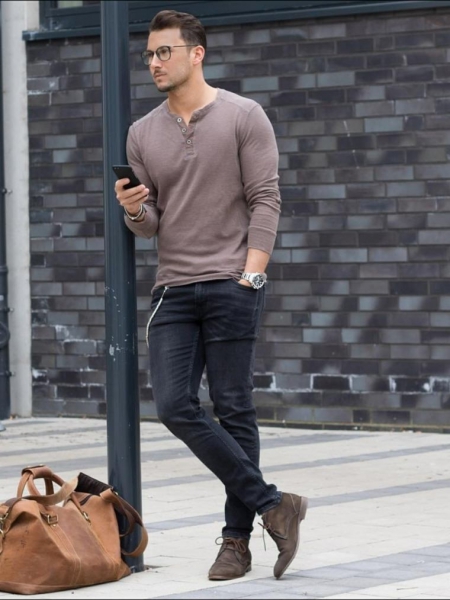 The shooting community is filled with masculine men who “don’t give a damn” about how they dress. Of course they do care, or they wouldn’t wear the informal gun-guy uniform of billowy polo shirt, loose cargo pants and Merrell hiking boots, right? Hey, we all want to fit in with our tribes and signal that we’re part of the in-group, and there’s nothing wrong with that.

But what about the gun carrier who, either by choice or by circumstance, wears something other than the shooter’s uniform? How does he remain discreetly armed if he chooses to dress outside the gun-culture norm, and more in line with mainstream fashion? Do slimmer-fitting clothes forever exclude a man from carrying anything more than perhaps a dinky, hard-to-shoot .380?

Not at all. There are several solutions to carrying reasonably effective and easy-to-shoot handguns even when wearing more up-to-date clothing styles. I’ll take a couple of examples of Galco employees who dress well and in line with current men’s styles.

Gun Carrier #1 is middle-aged and dresses stylishly but appropriately. He generally carries a smaller semiauto in an Ankle Guard. He generally avoids the heavily tapered pants that remain common in men’s style circles, but his pants still fit him very well and conceal his pistol perfectly.

Gun carrier #2 is in his 30s and also dresses stylishly yet appropriately for his age. His carry mode of choice is also a smaller semiauto in a broad plated IWB, in this case a KingTuk or KingTuk Air. He wears his shirts just slightly bigger than the current body-skimming men’s style and the pistol becomes effectively invisible.

There are other options beyond ankle and IWB holsters. The Underwraps, for example, is almost criminally underrated for uber-discreet concealed carry, and it’s one that I’ve personally used with great success.

And here we also see one of the greatest advantages of the trend toward slim and lightweight pistols – with good sights and decent ergonomics – that still fire service-caliber rounds. Guns like the Glock 43, S&W Shield and SIG-Sauer P365, in combination with deep concealment options like the above holsters, allow gun carriers to dress much more in line with current styles yet still remain armed with guns far more effective than pocket .380s. Slimmer fits call for slimmer guns!

Yes, there will always have to be small concessions to the bulk and placement of the handgun, but men need not feel confined to the loose fits and cargo pockets of the gun-guy uniform. This is particularly important in a time when the gun culture is increasingly composed of younger, more urban men of dating age who want to carry, but who still want to fit in with their peers and attract young women.