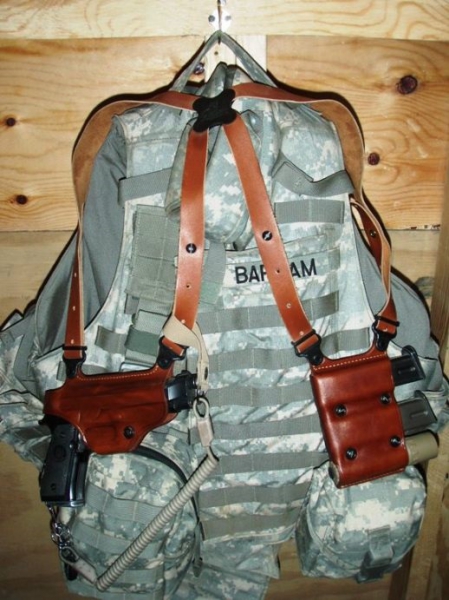 A couple of weeks ago, Galco received a SIG-Sauer M17 for holster fit testing. As I’m sure almost everyone reading this knows, the M17 was selected as the Army’s new service pistol. As an old – I just turned 47 – Army vet, this got me to reminiscing a little.

My first exposure to military pistols was on a National Guard firing range when I was maybe 10 years old. My father, and company commander of a Military Police unit at the time, brought my sister and me to the pistol range on a Guard camp in, if memory serves, Massachusetts. There I first fired a Guardsman’s S&W Model 41, a fine target pistol. But soon, out came the big guns!

Standing there, my head rattling around in the old “steel pot” helmet required on the range at that time, my trembling little hands held the hefty all-steel M1911A1 that was the US service pistol at that time. When I touched off a round, I distinctly remember, the recoil of the .45 ACP round sent the pistol over my head to where my forearms touched the front of the helmet. My father’s hand on my shoulder steadied me, but a wide grin spread across my face. I liked it!

A little less than a decade later, my father’s unit – he was by then a major and G3 for a military police battalion – was called up for Desert Shield. I was winding up Infantry and Airborne schools at Fort Benning but managed to get home before his unit deployed. Visiting him at mobilization station, my dad invited me to the pistol range to observe qualifications.

While the Beretta M9 had been officially adopted by the military by that time, not enough were yet in service to issue everyone an M9, so my father’s unit was still using the “substitute standard” Ol’ Slabsides. I managed to get myself onto the firing line and once again found myself with a M1911A1 in hand. It felt like an old friend at that point. My father carried a M1911A1 for the duration of his deployment in Desert Storm and Desert Shield. He never had to fire it in anger, thankfully.

I eventually got out of the Army and went on to civilian life, where I was an enthusiastic hobby shooter, especially of pistols. But the firestorm of 9/11 hit our country, and I felt compelled to reenlist, figuring I had at least some skills that a wartime military could use. I joined a National Guard infantry unit, and eventually deployed to Afghanistan, taking a sabbatical from my work here at the very supportive and patriotic Galco Gunleather.

I was issued a Beretta M9, which I toted throughout my deployment, in a holster attached to my body armor when “outside the wire” or on guard mount. Like thousands of others, I carried it in a Galco shoulder system when on base. It was certainly a serviceable pistol, though the grip is large for my hand and the trigger reach rather long. Nevertheless, I easily qualified Expert with it – though Army pistol shooting standards aren’t exactly high. Like my father, I never had to fire it in anger, but it was certainly comforting to have it available.

Which brings us to the SIG-Sauer P320-M17 that just arrived here at Galco. It’s a nice pistol. The grip and trigger reach are more comfortable – at least to me – than on the M9. Of course my old friend the M1911A1 feels even better, but the M17 is much less brick-like than the M9. I’ve never been a fan of DA/SA guns like the M9 (I may have read too much Jeff Cooper as a teen), and the consistent trigger on the M17 is much more to my liking. I suspect young soldiers will also like this new pistol. I’d have been very happy carrying it to Afghanistan.

Having the M17 here at Galco means, of course, that fits will be forthcoming. We’ve already listed some fits from the (civilian) SIG P320F, but the M17 has ambidextrous safety levers. And something I haven’t seen anyone else mention, it has a loaded chamber indicator that protrudes from the top of the slide. This little dingus prevents it from being an across-the-board fit in our P320F holsters, so we’re looking into that.

Speaking of Col. Cooper, he once pointed out that pistols are inconsequential weapons of war. However, he also observed that a man on the front lines can feel mightily comforted by having a good pistol at his side. My father and I both felt that way, and now a new pistol will bring that same comfort to a new generation of soldiers.

I hope they never have to fire it in anger. But if they do, I hope America’s young warriors are fast, accurate – and deadly.