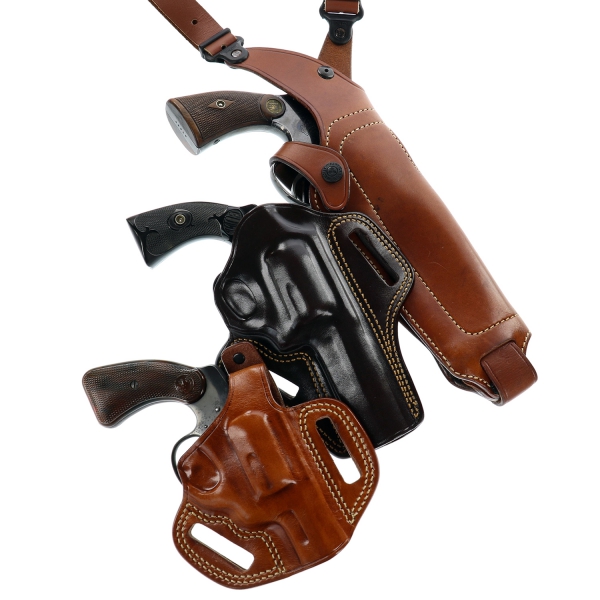 I’m known as the “old guy” here at Galco. When asked to contribute to the new Galco blog, my first thoughts were of vintage firearms, specifically revolvers. To be even more specific, revolvers in the almost obsolete caliber of .32-20 WCF, otherwise known as .32-20 Winchester. This great little cartridge was developed and used in the Winchester Model 73 and 92 rifles, as well as many revolvers of that bygone era before World War II.

My two particular revolvers are a classic Colt Police Positive Special and the venerable S&W Military and Police (which later became the Model 10). The Colt Police Positive Special is a 4” barrel revolver made some time in the 1920’s, while the 6” S&W M&P revolver dates to just before WWII, when most revolvers in that chambering were discontinued, probably because of the development of the 357 Magnum. Before that, the .32-20’s muzzle velocity of 1,100 ft/s was considered remarkable.

As you can imagine, holsters for the older guns can be hard to come by. Fortunately, I work for Galco! The M&P came to me with a vintage (and long discontinued) Galco Explorer shoulder holster that was missing the harness. Because of Galco’s long-standing philosophy of making modular holster systems, the harness was easily replaced by a current SSH harness that we still manufacture, and I was in business.

Luckily for me, Galco’s custom shop is happy to make many of our premium leather holsters in longer barrel lengths for a $50.00 custom fee plus the retail price of the holster. I chose the Combat Master for this customization, and while I was at it, I ordered it in the havana brown color with contrasting stitching.  The Combat Master is an excellent holster of a high ride pancake design that holds the firearm securely and draws with ease. It’s one of my favorite holster styles.

Wait. Now that I think about it, I also have a 1950-vintage Colt Detective Special with a FLETCH belt holster! That’s another great gun and holster combination. I guess I do have a weakness for those old revolvers carried in fine gunleather. And why not? Not only are they reminders of what some might say was a better time, but they can still be very effective.

A 4” .32-20 carried in a good modern holster like the Combat Master remains a fairly formidable defensive handgun, and one I carry from time to time. Same with that 2” 6-shot Detective Special loaded with good ammo, in the FLETCH. No, they won’t replace my Glock 32 in a Royal Guard IWB, but those old revolvers are still pretty competent defensive sidearms when paired with a good holster and good ammo.