Why We Don't Recommend Small Of Back Holsters 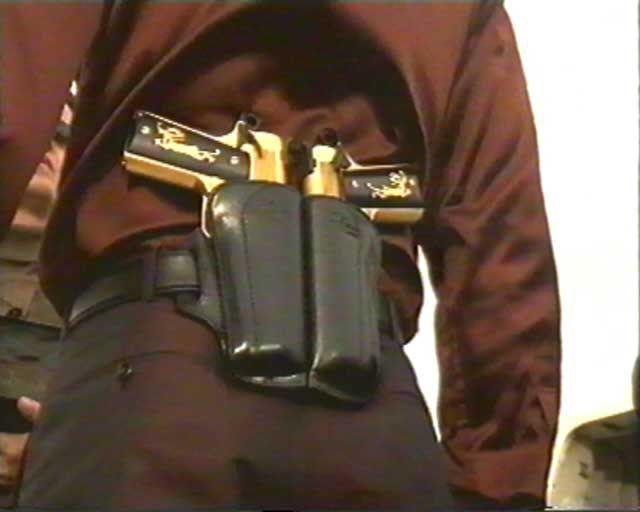 Galco gets a lot of inquiries about small of back holsters (or SOB holsters). These are holsters worn in the center of the lower back, over the spine, or what we’d call the 6 o’clock position. While this was a fairly common carry method in decades past, and remains one in gun-ignorant Hollywood productions, Galco hasn’t made a small of back holster in many years.

Galco discontinued the small of back holsters we made in the past because, frankly, it’s just not a good way to carry a gun. There are several reasons SOB holsters are a poor choice for defensive carry:

Obviously the most important is safety, and from several different angles. Firstly, if you should slip and fall on your back while wearing an SOB holster you’re at greater risk of a spinal injury. This is obviously not a good outcome, and spinal injuries can obviously be radically life-changing. In fact, you really shouldn’t wear anything hard over your spine due to the increased risk of injury in a fall, whether that’s a knife, cell phone, spare ammo, or anything else.

The second safety aspect is the draw itself. The drawing motion from an SOB holster, whether palm-in or palm-out, is extremely difficult to execute safely. It’s very easy to sweep one’s own lower abdomen, hip or thighs when drawing from the lower back. This is an unsafe draw method caused directly by the positioning of the gun in a “back holster.”

Speed is also an issue with lower back carry, with the draw being both slow and clumsy compared to a belt or IWB holster worn on the side or front of the body. This is further exacerbated by any shoulder rotation issues the shooter may have. Joint problems are a common issue in middle-aged or older people, especially among those who were very athletic in their younger years.

Weapon retention is also a serious concern. While SOB holsters are hard for the wearer to draw from, they make it VERY easy for an arms-length attacker to take the gun away. It is by far the most difficult carry position to defend against an attempt to grab the gun.

Finally, the majority of American jobs now require us to be seated most of the day. And even if your job requires you to stand, many of us have long commutes to our jobs. Small of back holster carry is seldom comfortable when you’re sitting for long periods.

There are many great alternatives to a small of back holster, both inside and outside the pants, and Galco recommends carrying a gun no further back than the 5 o’clock position for reasons of safety, draw efficiency and comfort.

Some better alternatives to an SOB holster include the IWB Royal Guard™, Summer Comfort™ and KingTuk™ series. If you prefer an OWB holster, look at the Combat Master™, Concealable™ and FLETCH™ belt holsters. Galco makes holster selection easy by showing a “body clock” with every holster worn at the waistline, quickly illustrating where on the body the holster should be worn.

To paraphrase a character in an old Hollywood production, “A lump of steel and leather pressed into your spine is no way to go through life, son!”